I’ve been toying with the idea of doing another version of the Pint of Plain app and one of the things I want to change is list of bars you first see when you open the app. During the week I ended up on Dribble and saw a screenshot from an app called Chow Now. 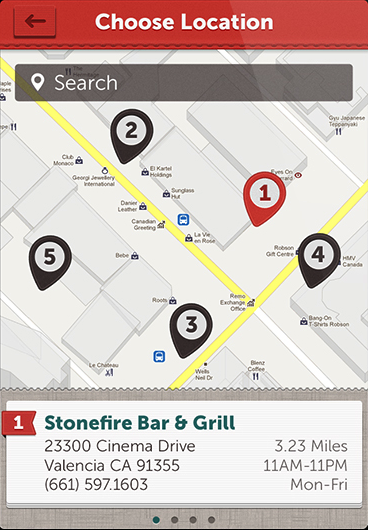 What I liked about this is that the extra detail about the restaurants is present at the bottom where’s there’s more room to breath.  It’s a nice combination of the now traditional map and list views.  I’m guessing that tapping a pin will make the scroll view move and swiping the scroll view highlights the pin.  The details at the bottom are far more detailed than a normal call out and there’s enough room to have the phone number tapable as well as leading to a more detailed view.

Now I’m sure this will be easy to build with [REDACTED] in iOS 6, but I want something I can use now as other wise it’s an idea that would lie rotting in my brain.  I also wanted to play with reusable UIViews built with Interface Builder as a test for a couple of future app ideas.

I’ve a first pass of my code in a repo on GitHub  and I’ll probably be poking at it a bit more over the next few weeks.  For something that I kicked about for a couple of hours today the core of it is there and I’m happy enough with the result.  It’s not as pretty as the example from Dribble, but that was never going to happen with my cack handed design chops.

There’s probably quite a few improvements that could be done to the current code (apart from the obvious hard coding of the data points).  It’d probably be better if the off screen views were generated just in time rather than all at once and I’ve still to figure out how it’ll handle a large number of annotations.  Still, it’s a good proof of concept and worth moving along.  We’ll see how it goes over the next little while.