The property tax is a bit of a mess. First it was to be self-assessment but now Revenue is going to send you an estimate of their own which you can then dispute.

Ronan Lyons has come up with a nice way of estimating the value of your house based on work he’s been doing on property prices. 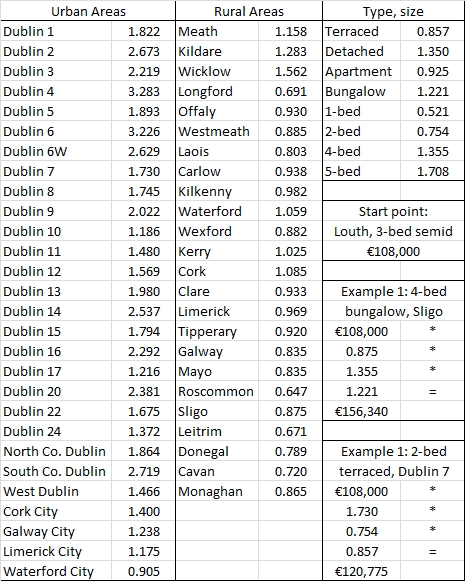 A table and some tapping of numbers is all well and good, but we know you’re lazy so we’ve whipped up a simple form to do all the calculating for you!

Obviously there’s caveats, so back to Ronan to explain them:

Clearly, this is by no means meant to capture every last factor affecting property values. (One simple extension is number of bathrooms – roughly speaking, every additional bathroom is associated with a 10% higher price.) This model captures just under two-thirds of variation in house prices in Ireland, which – given the small number of factors included – is pretty good. But there’s still a third out there to explain. (Including effects for areas within counties would explain a significant chunk of the remaining variation, as it happens.) On average this will be right, and it will for the vast majority of cases be close but of course there are always properties that have unobserved factors that dwarf what matters for most homes. The method underpinning the figures above explicitly excludes outliers, so as to better improve the estimates for the vast majority of homes.
The table above is based on 60,000 listings on Daft.ie over the year 2012, and allows for the fact that prices varied throughout the year. “Aha”, a sceptic might say, “these are only asking prices and sure we all know they are

[A version of this post also appeared on Broadsheet.ie]